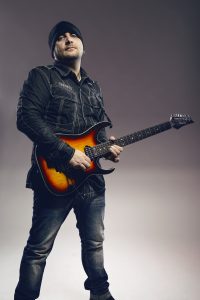 Born in 1980, Marco Sfogli is credited as one of the most influential and followed progressive rock and metal guitar player of the last years. He started getting interested about music at an early age due to his parents, both members of the world/folk band „Nuova Compagnia di Canto Popolare“. It wasn’t until 1989 when he received his first electric guitar as a gift and started to play along with his heroes (Michael Jackson, Van Halen, Europe). In 1992 he left the guitar to study the drums, another huge passion. „Being a drummer first and a guitarist second, helped me a lot in terms of creativity and rhythmic knowledge.“ In 1996 he left the drums because of his growing interest in guitar.

Today, he’s a guitar player, composer, arranger and also mixing engineer. He worked for a lot of artists, in 2004 he flew to Canada to record James LaBrie’s third solo release titled Elements of Persuasion which has become a hit among prog metal fans. Now member of the James LaBrie band, he put out his first solo record titled “There’s Hope” on Feb. 15th 2008 through Lion Music. “There’s Hope” was top seller in 2008 for the specialized web store “Guitar Nine Records” and got a 2nd place as Best Fully Instrumental Rock Album of all times by the website “The Top Tens”. He also worked on James LaBrie’s “Static Impulse” as guitar player, co-writer and additional engineer and on the latest “Impermanent Resonance”.

In 2011 he was invited to play at the “Jason Becker’s Not Dead Yet” festival in Holland with other huge names like Michael Lee Firkins, Guthrie Govan, Kiko Loureiro and Stu Hamm to name a few.

In 2012 he released a second solo album through JTC records titled „reMarcoble“ which had some awesome reviews. Marco has played and performed both on stage and in studio with a variety of artists so far including James LaBrie, Jordan Rudess, John Macaluso, Adam Nitti, Matt Guillory, Peter Wichers, Peter Wildoer, Ray Riendeau, Mike Mangini, Bryan Beller and many more. In 2013 he recorded guitars for Virgil Donati’s record titled “In This Life”. On March 2015 he joined the italian progressive rock legends PFM (Premiata Forneria Marconi) making his official debut on May 1st in front of nearly 700.000 people and on national TV.