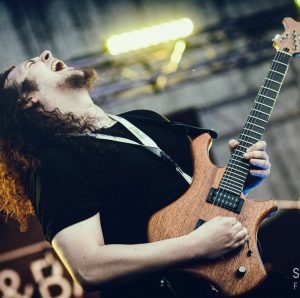 Justin Hombach is a Frankfurt/Germany based progressive metal guitar player and educator. When he touched his first guitar, he immediately fell in love with instrumental, progressive music. After deciding to pursue the music road professionally, he dropped out of school and went on to study jazzguitar at the famous „FMW – Frankfurter Musikwerkstatt“, the first ever Jazzacademy in Germany.

Being the head behind the german progressive metal band „AeoS“ and a guitar player for the rock vocalist/songwriter „Scherf & Band“, he toured all of Germany and Europe and won several prices like the „german rock & pop price 2011“. Besides his touring work he is an established session and recording artist. Currently Justin is on tour with the modern jazz-rock „Fractal band“, lead by german bassist Kai Rueffer.

Besides touring and recording, he is teaching and coaching the new generation of shred guitar players. To help even more guitar players follow their shredding dreams, he is launching „Justin’s Guitar Lore“ – an online academy and community for shredders of any level.

Always at his side is his Kemper Amp with profiles from Guido „Guidorist“ Bungenstock.