Guidos profiles are very organic and precise, so inspiring to play with! 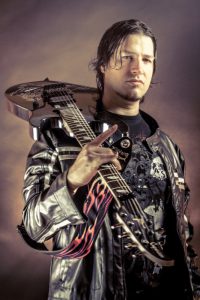 Alejandro Carrera is a Guitar Player and singer from Guadalajara, Jalisco, México, who is certified as a “Guitar Specialist” since 2012 by Berklee College of Music (Boston). He’s part of the prog power band “Fahrenheit” as guitar player and singer. The band released their 2nd EP “Shelter” for their upcoming album “Rain” that will be out in early 2016. Since 2013 Alejandro has worked as a session musician for the Loudmouth Studios (South Africa), recording guitars for various of their artist like “Ashley Mark Lane”, “Prelude to June” and “Johan van der Merwe”. On February 2015 he was contacted by “Cirque Du Soleil” to give him an invitation to participate in Mexico Auditions, which only a selected group of people attended. Alejandro has done various videos for the company “Positive Grid” upcoming products. Positive Grid is an international company dedicated to the creation of Guitar Software (Bias, Jamup, Bias FX…), for the IOS and Windows (Bias Desktop). He was the winner as Best Technical Guitarists Category in Sibelius Fest 2014 (international Guitar Contest Colombia-Mexico-Venezuela)

Through the years he has participated as session musician or as a band member in various bands and projects, like Gerardo Enciso (alternative rock), Gaston Project(alternative rock), Intorment (instrumental Prog Metal), Cruz de Hierro (Prog Rock), among others. Also he has participated in several band tributes for bands like Bon Jovi, Motley Crue, Slipknot, Symphony X, etc.) and has played all around the country. From 2011 to 2014 he was Director &
Instructor in the Modern Music Academy “Muzeik” (Guadalajara, Jalisco) teaching guitar & music theory. Besides his musical projects, Alejandro currently works as producer, arranger, recording artist, session musician & guitar teacher. Currently available as session musician or for Guitar lessons in Guadalajara, Mexico Area or online via Skype. AlejandroCarrera.net