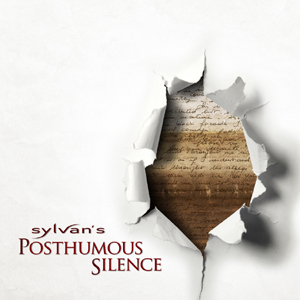 The Artrock formation from Hamburg SYLVAN has in recent years at scene connoisseurs with albums like “Encounters”, “Artificial Paradise” and “X-Rayed” earned an outstanding reputation. Originally started as a flawless Neoprogband with an exaggerated Marillion-list – as proof just listen once the very mixed picture debut in “Deliverance” – developed the five musicians one by one their own style completely. With classic neo prog band’s music has to do anything today. I prefer the term “new art rock”. Similar to Riverside SYLVAN process in their music, the different ingredients: In addition to symphonic prog and metal components are also very traditional and alternative-rock moments in the songs of the band. So SYLVAN have mixed a unique style cocktail that is above all held together by the distinctive voice Marco Glühmanns. He presses the tape with his vocals on their complete autonomy. With the current album “Posthumous Silence” we now have the first concept album of the band’s history. On their fifth album, the boys now have a total of fifteen tracks in telling a seventy-minute story. Now, it is true that many prog bands with the intent to record a concept album, to tend Überambitionierung. As we stand at SYLVAN?

First, there is need to be told that “Posthumous Silence” continues from the previous “X-Rayed” imported style. So if you liked this work is to make the new album is absolutely nothing wrong. It is therefore also the first album on which SYLVAN offer us at least musically, nothing fundamentally new. Rather, one has in particular focused on the lyrical concept and made minor improvements to the Sound. Thus we find on “Posthumous Silence” for the first time a real choir and a real cello. These two new ingredients to complement the existing sound excellent, bring additional depth into the material. In particular, the cello is some beautiful accents. Listeners who SYLVAN know yet, one can not readily explain what they expect here. However, I will attempt to me closer to the musical world of the Hamburg rudimentary. The band’s sound is initially very complex, yet always catchy. Soulful, almost classical passages that are primarily driven by the beautiful piano by Volker Söhl stand, to atmospheric, intimate moments that are usually formed by quiet guitar licks Kay Söhl. But there are also many songs that have a harder, more raw and basic orientation of sound was very reminiscent of alternative rock. As is typical for prog missing, of course, not the detailed instrumental departures. Are fleet, driving keyboard solos are just as gorgeous, beautiful spherical guitar solos that are in fact probably the only remnant from the time the neo prog band. Occasionally you will also slightly psychedelic. On the new album can be found also for the first time amplified voice samples that support the story and atmosphere of the album. The real showpiece of the band is singer Marco Glühmann, who by his always tremendously emotional vocals that constantly jumps between grief, hope and violent rages back and forth missed the band a totally unique sound. It’s his voice, his tone, which makes up for me in the first place SYLVAN. Overall, the sound of the band is very modern, this really is not “progressive”, that made progressive music.

The art is now, of course, put together all the above factors into a meaningful, compelling whole. And in the band is very good! Particular “Posthumous Silence”, the various elements and styles give each other hand, since this basically is a continuous piece of music. In the seventy minutes every musical motifs are revived, produced cross-references in the songs with each other to strengthen the concept of character in addition. Maintain the musical tension over such a long period and incorporate upright no boring or unnecessary passages is very difficult, but the five hamburgers to make it!

The lyrics that are completely out of Marco Glühmann are, fortunately, failed open to interpretation. Although one can understand the action easily, yet remain in many beautiful moments leeway that invite speculation. The lyrics are wonderful and insightful metaphor, seem somewhat elegant. Blends perfectly with the emotional character of the music. About the story itself is not too much can be revealed: It’s about an old man whose daughter has recently committed suicide because she is no longer coped with their lives and the world. Her father sits dejected and tieftrauernd in a dark room and reads the only legacy of his daughter. Her diary that she had actually written just for him. Although the lyrics do not really much action takes place, but a whole lot of thought to be found again. The thoughts of the daughter are certainly anything but contrived by the nose, I think there are some young people who have similar problems with their lives, or the questions that deal with the daughter. In reading the lyrics and listening to the accompanying music will be certainly very made to think about our society and the modern world. Every person who is interested in this subject matter, this album is recommended that reason alone.

What “Posthumous Silence” but ultimately gives the note that is down there is, firstly, the fact that it received text and music, so tightly woven unit, as long gone – since Marillion “Brave” I know of no known album that story, atmosphere and music combines so perfectly. Secondly, the listener who gets involved in the album, necessarily addressed on an emotional level. You can not just listen to this music without having to worry. The lyrics, the vocals, the guitar solos – all that really pulls the listener that he experienced during the entire playing time at first hand the, experience what the protagonists of the story and feel. To write music that is so close and so caught the listener takes is a very great achievement. It must also be remembered that SYLVAN here put everything alone on the legs. The production of drummer Matthias Harder is excellent: it is clear, yet dynamic, powerful and extremely dense. Each instrument can be tracked easily at any time, so that the bass lines of Sebastian Harnack not perish. Such beautiful bass work can be heard but not all days! Since the 24-page (!) Booklet was designed in-house and also still looks absolutely fantastic, “Posthumous Silence” is actually a pretty perfect work. An album that the term “work” actually earned.

Since “Encounters” SYLVAN are for me at the top of the German progressive rock movement on the road. With “Posthumous Silence” they have now outdone themselves. I imagine seriously the question of how the band wants to make such a work of art yet. Here fans of the band actually already know what’s next: After this prog is full operation this year with “Presets” SYLVAN appear one more album. With this you will then dare to attack on the charts and on the radio. It will contain more compact songs and let the prog rock on the left. Wait and see, then, what’s coming at us. In any case, the guys have done a lot.

Who wants to hear really fresh art rock who does not shrink from that music is not only fun, but also emotionally entrains that this masterpiece should be careful to make the record shelves. I have long wondered if I should really do it, but it’s time. In addition to “The Art Of Navigating By The Stars” by SIEGES EVEN “Posthumous Silence” now comes the second album, which gets full marks from me. Even though the year is still young, I do not think this year will still appear many discs SYLVAN disincentive to put my personal album of the year. Fantastic!