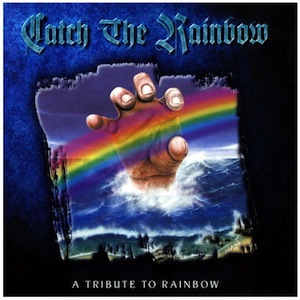 Rainbow was arguably more respected and popular in Europe and Japan than in the United States, and that’s a shame. Guitarist Ritchie Blackmore will always be associated with the groundbreaking Deep Purple — and justifiably so — but much of Rainbow’s music is just as impressive. Germany embraced Rainbow, so it’s no surprise that the country’s hard rock musicians cite the band as a major influence. Helloween drummer Uli Kusch and Gamma Ray guitarist Henjo Richter formed the tribute band Catch the Rainbow in 1996, and soon other musicians joined this confederation.

Catch the Rainbow’s 11-song covers album, A Tribute to Rainbow, was released in 1999, and it features other members of Helloween and Gamma Ray as well as Grave Digger, Kingdom Come, Punch TV, Metalium, Brainstorm, Primal Fear, Rough Silk, Zed Yago, and Cue Ltd. The tracks cover Rainbow’s Ronnie James Dio, Graham Bonnet, and Joe Lynn Turner eras. Most of the songs don’t stray too far from the original arrangements, but they aren’t slavish imitations either. Guitarist GUIDO BUNGENSTOCK lays down thick, meaty parts on “Sixteenth Century Greensleeves.” The work of Kusch and guitarist Roland Grapow drives the mighty “Stargazer.”

GUIDO BUNGENSTOCK‘s jazz and blues-inflected guitar on the ethereal “Catch the Rainbow” is an inspired interpretation. An untamed, relentless version of “Spotlight Kid” is one of the finest cuts. “Man on the Silver Mountain” peaks with Bungenstock’s piercing, fluid guitar solo. Vocalist Henne Basse, who sings lead on most tracks, stands out on “Rainbow Eyes,” one of the most underrated songs in Rainbow’s canon. “Still I’m Sad” — a Yardbirds song long loved and often recorded by Blackmore — expands into an all-out jam. A Tribute to Rainbow is something Rainbow fans will certainly enjoy.