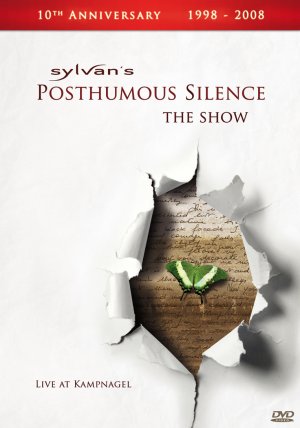 The 80 minutes long show begins shortly before the start of the concert with a closed curtain and already eagerly applauding fans. Volker’s synth pads in the intro already point out that it is already getting ready to go. Very challenging images (eg Sylvan logo and “Posthumous Silence” cover or a single tree in the sunset) are projected on the curtain still closed and it follows the intro “Eternity Ends”. Once the piano melody of “Bequest Of Tears” is heard, Volker Söhl is illuminated by spotlights and thus incorporated into the scene of the still closed curtain. That looks really impressive, as he stands on one side and the leafless tree on the other side.

Once Marco’s uses delicate singing, he is also illuminated and appears in the melancholy scene. To Stefanie Richter plays cello (she has also worked on the album). Although the landscape disappears, the curtain will also remain closed and so are Volker, Marco and Stefanie only dimly visible through the curtain. When listening to the end of “Bequest Of Tears” Sebastian’s distinctive bass, seems only the silhouette of GUIDO BUNGENSTOCK through the now brightly lit curtain. This is done optically really great. With seamless transition to “In Chains”, the curtain falls and the band starts its amazing gig with a light show that is the music finally meet. While in previous performances, the lighting effects were good, but in this show they put on it again a nasty shock.

Besides drummer Matthias Harder, who’s back for very sophisticated rhythm sequences are on the electric guitar, Jan Petersen, who officially since 2007 belongs to the band and to see Guido Bungenstock that than by Kay Söhl’s exit until autumn 2007 with her live concerts guitarist has helped out. Furthermore, the band has yet to Stephanie Hundertmark, Petra Schechter and Miriam Schell (whom this name sounds familiar, it’s musical partner of Matthias Harder to Rain For A Day) added brought three backup singers who remain true vocal in the background, the sound but still give a little more volume and Marco support.

In parts, the beautiful light show is supported also by films that run in the background on a large screen. But this concert recording, which gives the concept album “Posthumous Silence” finally the proper frame is worth buying this DVD. The only drawback, I would have all the other pieces of the live concert (another 76 minutes), which are available on the double CD to “Leaving Backstage”, as desired concert recording on the DVD. One can from the guys namely not have enough!

Sylvan but still offer a range of extras with 96 minutes playing time, it has really come into himself and for the fans really have much to offer. Firstly, because the 19 minute version of “Artificial Paradise”, in which the musicians celebrate the piece really is (Goosebumps guaranteed).

The complete concert is further provided with comments from Matthias, Sebastian, Marco, Jan and Volker. Something like this is really only knows of films. Great that a German band decides to talk to her concert a comment. The audience learns as much about the music, the musicians and the show. One can also can show the German lyrics of the songs.

As an added bonus, there is next to a slideshow, and extensive interviews with the musicians (the outtakes here with a lot of humor has been compiled) and three features that show us an insight into the music production and the creation of the show. Funny thing is that the makers come out (or is it due to the musicians) as fans of American action series “24″, because the feature “34 Days” is built in the style of the action series. This is reflected among others in the following words, the rhythmic / digital noise the passing seconds, and the split screens. And when viewing this feature you have the feeling to be directly been there. This bonus material is really at its best and makes the purchase of the DVD so indispensable.

I had already the opportunity to learn the guys personally (for concerts and during an interview), these likeable musicians come just as naturally as they are, over on the DVD.

Sylvan is the DVD “Posthumous Silence – The Show” managed a true masterpiece, the hide must before any major production, but rather the major company’s big acts and the fear of teaching. The guys did not let perfectionism only exercise, but the part with so much love and passion created that this feeling also transfers to the audience. For me, this Hammer DVD a must and I can only hope that does not wait another 10 years before there is another DVD of this, one of the best prog bands in Germany.