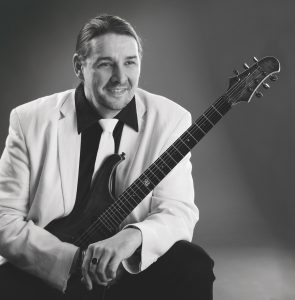 Raimund Burke is a Hamburg/Germany based hard rock guitar player and multi instrumentalist. 1984 (when he was 15 years old) everything began with the first guitar, given to me by my parents (because the drum kit was too loud in the house). In the same year he founded his first hard rock band „Inverness“ together with Peter Breitenbach. 1990 he took classes in Popular Music at „Hochschule fuer Musik und darstellende Kunst“, Hamburg, Germany. He has gone through some band experiences and since 2004 he has recorded 4 solo records so far. His albums received excellent press reviews worldwide.

Now he just realised his long-cherished wish of making not only a complete Glenn Miller album but also a One-Man-Big-Band video clip for „In the Mood“. 15 Songs played by the „Raimund Burke Orchestra“. Recorded in two years. With up to 14 guitars on each track. This is an exceptional new adaptation of the legendary Glenn Miller Songs! With fantastic guest vocal appearances and some surprises…
RaimundBurkeOrchestra.com | RaimundBurke.com